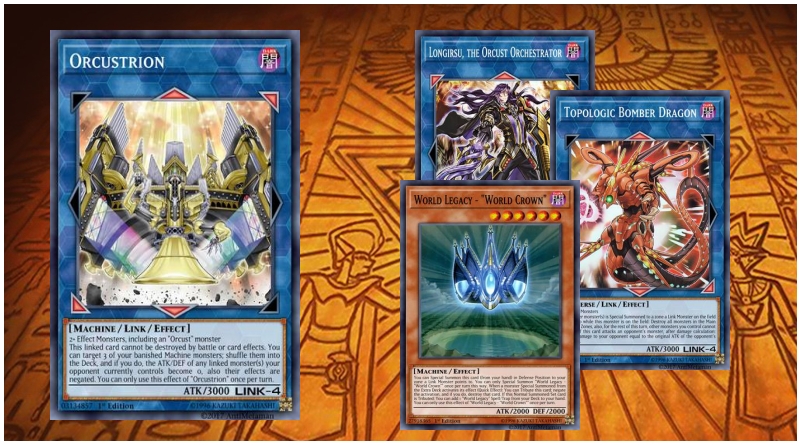 The broad strategy of an Orcust deck is to use the effects of the 3 monsters in the GY to summon each other to the field and "ladder" the Links, while using Orcustrated Babel to keep up the tempo in your opponent's turn. Let's go over the card choices in small groups.

Orcust Harp Horror, Orcust Cymbal Skeleton and Orcust Brass Bombard are the heart of the deck, their effects in the GY are the engine. Harp Horror is clearly the main playmaker you're aiming to get the GY ASAP, but Cymbal Skeleton has more value on your opponent's turn where you can revive the Link monsters in a pinch. Brass Bombard is obviously not always as useful, as it requires you to have drawn into another Orcust monster, which can be a tall order when the archetype currently has so few names, but for that same reason we need as many as we can get so we still run 3. World Legacy - "World Wand"  is related, but doesn't have the advantage of being summoned by the Orcusts nor becoming a Quick Effect from Babel. It's mostly useful if you need to extend your plays some more after using your other resources.

Armageddon Knight, Mathematician and Scrap Recycler all serve the same purpose - without any other sort of engine, the only way we make plays is with our Orcusts in the GY, so we need to achieve that as soon and as much as possible. With an added Reinforcement of the Army to make 10, yugioh.party's hypergeometric magic tells us we have a 78% chance, which is acceptable considering the deck has multiple draw cards. Armageddon Knight is obviously the most versatile, as the other two can't send "World Wand", but most often you'll just be sending Harp Horror.

The Orcustrated Spells are what push Orcust from a cute little engine into a playable deck. Orcustrated Return is a classic "plus zero" draw card, similar to Trade-In, with the added benefit that almost anything you send will have an effect once it's in the GY. Later in the game when your hand is empty, you can send a Link monster and just revive it with Cymbal Skeleton. Orcustrated Einsatz allows you to prepare resources for disruption on your opponent's turn after exhausting them all on your own, and why have I mentioned the opponent's turn so much when everything's an Ignition effect? Because Orcustrated Babel makes them Quick, just like that. Despite the fact these latter two cards are so important, we only play two copies each, because they're searchable and you can only use one of each at a time.

The Traps aren't quite as illustrious, but I'll explain them for completeness. Orcustrated Core gives you something to search when the rest is exhausted and a little bit of protection, as well as getting another card banished for the Link Monsters if you're really desperate. Orcustrated Attack is just bad. Karma Cut has the same effect with a cheaper, generic cost and no activation condition. It's only in the Side Deck because it's half empty anyway and so you can see it.

Now, what's the end goal of all this? Galatea, the Orcust Automaton searches all your important cards like Babel and Einsatz, with a cost you practically have to have fulfilled before you summon it, which also recycles your resources for future use. Longirsu, the Orcust Orchestrator is a nifty bit of spot removal, and the card effect immunity without having to ladder all the way up to Link 4 is important for a play we'll get into later. Orcustrion's effect can be difficult to get the requirements for, but if your opponent has a big board of Link monsters it can be a total blowout.

Foolish Burial and Monster Reborn are pretty self-explanatory inclusions for a GY-focused deck like this, I would think.

World Legacy - "World Crown" has an impressive amount of synergy with Orcust for being a card associated with their Crusadia enemies. As a World Legacy monster, it can fuel the costs for Return and Core, and be summoned by "World Wand" - but you don't need to, as it's easy to have it summon itself to a zone which gives all the Orcust Links their protection, after which you can use it to Link ladder or leave it on board as a negation that's not trivial to run over.

Allure of Darkness is nicer than usual in this particular deck, since the banished card can just be recurred with any of the Link effects. Limiter Removal is another card you can nullify the downsides of, as Longirsu and Orcustrion can be made immune, or in the worst-case scenario simply revived with Cymbal Skeleton. Burial from a Different Dimension is a little bit "whatever", but sometimes you can banish faster than you shuffle back and you need some extra resources late in the game.

Linkuriboh can salvage hands that brick into too many Orcust monsters, you simply Normal Summon Brass Bombard, link it away, then use its effect to summon Harp Horror (ideally) and continue into at least Longirsu from there. Wee Witch's Apprentice, Underclock Taker and Decode Talker are there just in case they come but, any tech monsters need to be DARK because of the restrictions on the Orcust monsters. Witch can at least help push for game depending on the board state and matchup. On the other hand, Topologic Bomber Dragon is a major player. Almost any deck that can Special Summon as a Quick Effect has some build that focuses on using Bomber during your opponent's turn, and as a purpose-built DARK Link deck with protected cards like Longirsu that you can summon and have stick around, Orcust is the best one for the job by far.

Note that while I didn't play any, Brass Bombard is a Tuner and you can theoretically make Synchro plays. 4 and 5 aren't great levels though, especially when you can only make DARK monsters. I guess if you really like Underworld Fighter Balmung? As all the Link Monsters only need one material to be from the archetype, Orcust can blend in well as an engine as a hybrid deck, as long as the other half is also DARK, but this deck is meant to demonstrate how they play pure. This deck can absolutely play monsters like Borrelsword Dragon, but this deck is adapted from real life and I can't even begin to afford that nonsense.

I don't like including a Side Deck in online deck profiles. The "metagame" online is an unpredictable, casual mess that rarely plays Match Duels anyway, and even if you take this build in real life, a casual deck shouldn't be expecting meta matchups, and you know your locals better than I do. Nevertheless, Dinowrestler Pankratops is so cheap, so generic and so good that I can't imagine anyone not bothering, and Dimensional Barrier saves this Machine-type deck from the ever-present threat of Chimeratech Fortress Dragon (remember when Cyber Dragon could only do that to certain decks?). I also recommend some Spell/Trap removal that doesn't require a summon, though which specific card is up to you. Attack is just there so you can see it. It's bad. Go away, Orcustrated Attack.

Pretty much any ideal game will start like so: Normal Summon Armageddon Knight or an equivalent, and send Harp Horror, which will summon Cymbal Skeleton (or Brass Bombard if you have an Orcust in hand) and make Galatea. Your priority order for searching there is Babel > Einsatz > Return (if you have anything spare to send) > Core. A much more underwhelming 1-card combo than Danger! Dark World FTK, but that deck doesn't play mr. skeltal so I think we're the real winners here. Any other way to Special Summon, like Brass Bombard or "World Crown" will get you to Longirsu, then Cymbal Skeleton can revive Galatea and make a Link 4.

Going first, the best bet is to go for Topologic Bomber Dragon for disruption. If you can get another Cymbal Skelton back in the GY through Einsatz, Burial from a Different Dimension, or recycling the same Skeleton with "World Wand", you can use Babel to summon Longirsu to its zone on the opponent's turn. Longirsu is linked (pointing to and/or being pointed at by any monster on the field), so it won't be destroyed by Bomber, and if you set your zones up right it can point at the free Extra Monster Zone to remove the survivor or any follow-up. The ideal zone setup here is Topologic in the right Extra Monster Zone, and Longirsu in the centre Main Monster Zone pointing at the left. On the other hand, if things are going poorly and you're stuck with Longirsu and Galatea, you want Longirsu in the left Extra Monster Zone so that you can put Galatea in the centre, pointing at the right and enabling their protection.

Bomber can still be useful going second depending on your opponent's board, but if they have no good monster to attack for burn, protection so that you can't blow things up, you have to play through disruption, or you simply opened Limiter Removal and want to go for a cheesy OTK, you might prefer Orcustrion as your Link 4 for protection, negation and synergy. In general Bomber's usefulness declines as a game goes on.

As previously mentioned, if you opened too many Orcust including Brass Bombard you can start with Linkuriboh as a backup strategy.

As far as success goes, Orcust is a very matchup-dependent deck. Losing Special Summons to Fossil Dyna Pachycephalo, effects to Inspector Boarder or GY access to Necrovalley can leave you with very little counterplay (or play at all). As previously mentioned Cyber Dragon can also run roughshod over you as your entire deck is just Fusion Material for a giant Fortress Dragon. Meanwhile, if your opponent sets up a big board of Link Monsters like Cyberse (or maybe even Gumblar Gouki, though I haven't experienced the matchup myself), and you can get out Orcustrion, the game is practically over already.

Orcust have become one of my favourite decks since the moment they were released. Between their aesthetic (doot doot), their gameplay, and the new chapter in the World Legacy lore storyline, I love just about everything about them (except Attack). Hopefully this massive wall of text hasn't scared you off already and I've convinced some people to give it a go. Thanks for reading this far, and I hope you enjoy playing with Orcust. 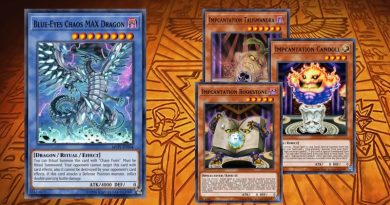 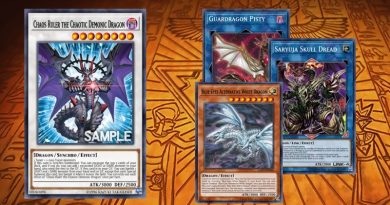 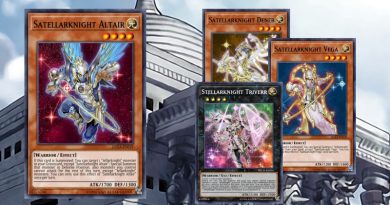 One thought on “Orcust (Soul Fusion)”

Many fans know about the ‘Egyptian God’ cards from the ‘Yugioh Duel Monsters’ anime series. But they aren’t the only set of three almighty beings. In ‘Yugioh GX’, we were introduced to their counterparts; the three ‘Phantasms’, or in English, the ‘Sacred Beasts’.