The 2nd YGOPROdeck Trinity Cup has ended! This article covers the most popular cards used in this tournament, how to use them, and why they’re used! This metagame was very Graveyard-based, with Dragon Rulers and That Grass Looks Greener decks at the top!

If you’re new to Trinity, you can read an introduction to the format here! In a format featuring lots of maindecked Trap Cards, playing backrow removal is essential. Mystical Space Typhoon, which saw play in 83% of all decks for this tournament, is the pinnacle of spot removal. Cosmic Cyclone also saw critical play as a second copy, with  56% of decks opting to play it. The 1000 LP cost on Cyclone is minimal when compared to the amount of utility the card grants. As you’ll see later on in this list, Spell/Trap cards which can be used from the Graveyard see a solid amount of play: Cosmic Cyclone is the best response to these.

These cards can also be seen as better than other legal Spell/Trap removal, even when considering cards like Giant Trunade and Hey, Trunade!. Many decks choose to play a Field Spell card as the centre of their engines – With one of the most popular decks from the last metagame aptly being named “Field-Spell dot Deck“. Mystical Space Typhoon is able to remove the field spell before it can resolve; the Trunades cannot. Currently, Raigeki is Forbidden, and both Dark Hole and Interrupted Kaiju Slumber are Semi-Forbidden. Because of this, Mirror Force and its many variants have taken over the mass-monster-removal scene, even more so than Lightning Vortex (Which is featured in 33% of decks). A huge skill-tester of the format is knowing when to attack with all of your monsters, and when to shift some to defence position to play around a Mirror Force.

Both Mirror and Quaking have seen a similar amount of play. So, which is better? You should really stick to your own personal preferences here, as the difference between their functions is pretty minimal. Personally, I prefer Quaking Mirror Force at the moment, as it denies the opponent future resources. The prevalence of Graveyard shenanigans also makes it slightly worse to destroy monsters outright. Regardless, Mirror Force itself can pave the way to a big damage push! Mirroring the TCG, the vast majority of Trinity decks chose to include this card for the Trinity Cup. 72% of all decklists included the 1 copy. There are two reasons for this:

Secondly, the card is just good. It negates a very broad spectrum of cards, which is very important in a format which features massive deck diversity. Every deck features a non-zero amount of search/draw cards, meaning that Ash Blossom & Joyous Spring will always be able to do something. On top of that, it’s even capable of turning into a Black Rose Dragon or some other Synchro monster in a pinch. The ever-popular Dragon Ruler decks can use this card to summon Leo, Keeper of the Sacred Tree. It’s also a FIRE monster to banish with Blaster, Dragon Ruler of Infernos! Ash Blossom & Joyous Spring isn’t actually very oppressive in Trinity. Okay, it can negate a lot of cards, and it can’t be removed by backrow removal. But note that Trinity is much, much slower than the TCG. There really aren’t any “turn 1 combo” decks in the same way as the TCG. Because of this, the real oppressive negation card is Solemn Warning, which is currently being played in 67% of decks.

Personally, I find Solemn Strike to be a better card – And 61% of decks did opt to play Strike, in addition to Warning. However, Warning does offer many things which Strike cannot: Warning negates Premature Burial (50%), as well as semi-popular revival-trap cards, such as Call of the Haunted (17%).

Regardless, monsters summoned by revival traps often use their effects, which is what Solemn Strike can negate.  In future tournament reports, I expect to see an increase in play of Solemn Strike over Solemn Warning. Fairy Tail – Luna was a huge component of the previous metagame. Moving into this format, Eater of Millions (56%) seemed to be taking its place. The summoning restriction of this card isn’t very restrictive at all, since Trinity decks tend not to focus much on the Extra Deck. Once on board, Eater is an Ally of Justice Catastor which banishes face-down! The massive popularity of the card and the large resource investment required to beat it resulted in it becoming Co-Forbidden! We can see a definite trend in what makes cards popular. Alongside Mirror Force, Torrential Tribute is one of the most frequently played board-wipes in this metagame. 56% of decks include the 1 copy.

Torrential has always been a mainstay in slower formats. It’s a reactive Dark Hole which punishes players for over-committing to the board. The card has seen increasingly less play in this more Graveyard-based meta (which features many recurring cards which evade the Torrential Tribute), but Torrential is still a vital component of any less aggressive deck. Terraforming, being the best field spell searcher, was hit to Semi-Forbidden on the last Forbidden list. As a result, both Set Rotation (50%) and Metaverse (50%) are much more mainstay in field spell decks. A second Rotation target is Chicken Game, which saw play in 44% of decks. It’s not uncommon to see Chicken Game in non-field spell decks as another Upstart Goblin!

Seemingly, players don’t seem to have a direct preference over Set Rotation or Metaverse. Decks which heavily utilize Field Spell cards generally want to consistently access their field spells as often as possible. At the moment, the most commonly played Field Spell cards are:

Notably, all of these cards have favourable interactions with Giant Trunade. Being able to not only remove an opponent’s line of backrow, but also gain an additional search from your own field spell card made t his interaction very strong. It also made there be an ever-increasing need to quickly fetch a Field Spell card from the deck. Premature Burial is currently seeing play in 50% of decks. Generally, you can throw Premature Burial into any deck which utilizes both monsters and the Graveyard. What may surprise you is how many decks exist which cannot play this card!

Quite a few decks in this tournament were of that very substance. They either don’t play many monsters, or they focus more on Spell/Trap cards than monsters. For example, a Graydle-Pacifis control deck only plays 6 monsters (in a 30-card deck). Of those, only 3 of them are the Graydles, cards  that you’d want to Summon with Premature Burial. Other decks which don’t especially want to play the card include True Draco, Spellbook, and Stun.

These cards haven’t quite seen enough play to make the rest of the list, but are still being increasingly popular within the format:

Reinforcement of the Army

Both Photon Thrasher (22%) and Armageddon Knight (17%) are on the rise in playability. Thrasher is an amazing beater and rank-4 enabler. Knight supplies utility and search power to decks which need it. As a result, Reinforcement of the Army was in a pretty solid 33% of decks for this tournament. Lost Wind (39%) is possibly the newest addition to this list, in terms of printing and play. The card saw very little play last format, yet is seeing massive play in Grass Decks and non-mill alike. The card stuns the opponent for a turn, even when milled. It can also provide incremental advantage even when drawn from the deck.

A card which is surprisingly under-performing at the moment is Breakthrough Skill. Although many predictions for this metagame involved That Grass Looks Greener at the top, only a few players opted to play the deck. Breakthough Skill, still seeing some play in the 28% of mill decks this tournament, is somewhat worse than other negation options such as Solemn Strike, and the aforementioned Lost Wind, which has a much better graveyard effect than Skill. Hey, it’s Giant Trunade! Who’d have thought that a mass-backrow wipe would be on this list? Having been unscathed by the last Trinity Forbidden list, Giant Trunade is at the forefront of mass backrow removal. Its leagues better than “Hey, Trunade!” which only saw play in 11% of decks. To compare, 50% of all builds included the Giant Trunade.

Giant Trunade is not only able to wipe the opponent’s backrow, but also return your own field spells or Premature Burial to the hand. This prevents the Trunade from being an outright -1 to card economy.

Quite a few of the more dominant strategies have been cut down by Trinity’s Community Banlist. Although all of the decks from this tournament are still viable contenders – in some form – for the next metagame, Grass and Graveyard decks will likely not be nearly as popular.

To start with, all of the Spell/Trap removal in this format has been reworked: Twin Twisters, Giant Trunade and Heavy Storm Duster are all now Co-Forbidden. This means that you’re allowed to play 2 different copies of the best legal Spell/Trap removal available, for the price of 5 extra cards in the maindeck.

Will the Co-Forbidden S/T removal replace the ever-popular Mystical Space Typhoon and Cosmic Cyclones? I don’t think that we’ll see any of the Unlimited removal being replaced by their Co-Forbidden counterparts. Instead, the decks which really struggle with backrow will likely be opting to play both. Fairy Tail – Snow, who was one of the leading members of this metagame, has been Co-Forbidden. This causes Graveyard Strategies to become much less consistent. Not only does it add an extra cost to playing a graveyard deck, those decks are also now incapable of playing multiple copies of the card.

A package with Fairy Tail – Luna and Fairy Tail – Rella may be in the making. Luna can search either Rella or Snow, and Rella is able to search a variety of Equip Spells including Wonder Wand!

Although Pendulum was not a popular deck in this Tournament, Odd-Eyes Vortex Dragon was placed on the Forbidden list, due to its synergy with Odd-Eyes Arc Pendulum Dragon. Despite all of this, Pendulum is still looking to be a very powerful deck in the upcoming format. Pendulum Summoning “cheats” Trinity’s Summon Limit, leading to very fast games. In addition to this, non-effect Pendulum Monsters, such as “Metalfoes” monsters or Qliphort Scout, don’t count towards the Summon Limit at all! This allows Qliphort Scout to become a 1-Turn Cyber Dragon Infinity, after searching out a Qliphort Monolith! Will the newly Co-Forbidden Spell/Trap removal be able to keep the newfound Pendulum Menace in check? Only time will tell!

Until then – Stay Groovy! 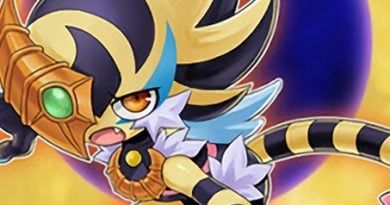 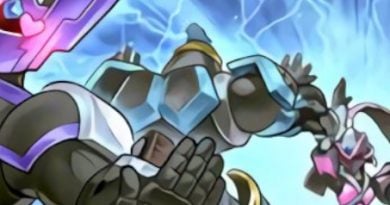 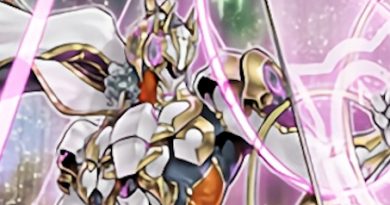