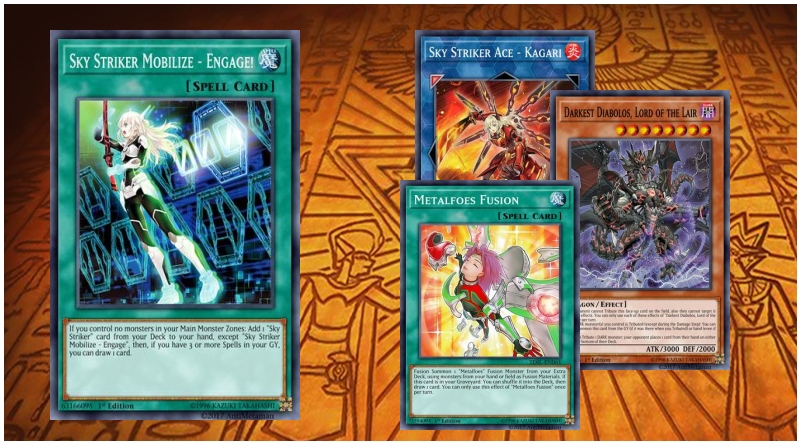 Introduction:
Sky Strikers have solidified themselves as the one of the best decks in the November 2018 TCG Metagame,sharing the Tier 1 Spot with Thunder Dragon and Danger!Dark World FTK.
It is a control deck that aims to gain enormous card advantage over the opponent to overwhelm and take over the game state.Going first it usually sets up 1-2 negates with recovery options ready for the next turn,and going second it is capable of breaking boards with their Maneuvers and Widow Anchors.
My version is the pure build,without combo cards like Scapegoat and Phantom Skyblaster.
The Deck:-
Starters,the deck's main play initiators,that require next to none,or no set up to play(15):
3x Sky Striker Ace - Raye
A crucial component of the deck,and the only normal summon in my build.She allows for instant access into any Sky Striker monster.The recovery effect also comes up often.The combo variant can get away with playing 2,but in the pure version you want 3.Losing a copy of Raye (banishing effects,etc) can be quite detrimental early on,especially in the mirror,and getting the next one in your GY is quite important.
2x Foolish Burial Goods
Dumps Metalfoes Fusion to the GY,and really helps Engage-less hands by sending Engage to the GY,caving the path for a follow-up Kagari to grab that Engage.3 clogs,1 doesnt come up as often as you'd want.
3x Sky Striker Mobilize - Engage!
Without doubt the heart and soul of the deck.The deck revolves around repeatedly activating Engage to gain advantage. Being able to search any Sky Striker card is just too powerful to pass up on,and the draw 1 becomes really prominent late game. No less than 3,no exceptions(unless you can't afford the 3rd copy).
1x Reinforcement of the Army
Turbos out Raye from the deck.
1x Foolish Burial
Dumps Darkest Diabolos(see Darkest Diabolos,Lord of the Lair under "Extenders").
1x Hornet Drones
It became limited because of how generic the token-summoning effect was.You normally want to grab this only after you already have a Raye in your GY,for the recursion safety.
2x Terraforming
Turbos out Area Zero (see Sky Striker Airspace - Area Zero).
2x Sky Striker Airspace - Area Zero
Lets you potentially remove cards from your Main Monster Zone, make use of a drawn Metalfoes Fusion while gaining some advantage.You can pop it with Afterburners or Twin Twisters when you side it in (more on TwTw ahead) to get out a Raye from your deck as well.
Extenders,cards that require set up and are normally follow-up plays from starters(6):
1x Darkest Diabolos, Lord of the Lair
The main usage of this card is its effect to reduce your opponent's starting hand by 1. Besides that,he is a 3000 ATK Body that is untargetable,proving invaluable against the mirror and Altergeist matchups. You want to get him in your GY early on so that he acts like another Raye to put the pressure on your opponent.
1x Monster Reborn
Free revival is always welcome.
1x Soul Charge
The bomb card you dont want to use unless you're going for game via something like Topologic Trisbaena or go into some control cards like Borreload or Ningirsu.
2x Sky Striker Mecha Modules - Multirole
Generates immense advantage for the deck by allowing recycling of the Sky Striker spells. 3 is largely unneccesary, and 1 would be too fragile to disruption.
1x Sky Striker Mecharmory - Hercules Base
You don't want to see this card early on, and really only need 1 for the recycling effect, mainly to be used on your Sky Striker Extra Deck monsters.To be sent off of multirole or area zero to trigger its effect.

Defense,cards used to disrupt the opponent's plays(12):
3x Ghost Ogre and Snow Rabbit.
This slot can be used on any handtrap of preference,but other handtraps like Ash are currently not very strong versus the meta.
3x Sky Striker Mecha - Widow Anchor
Searchable negate. Stops your opponent's plays and the control effect is what you want to save the anchor for,so that they are left with less resources to make their plays. In the mirror, this can be chained to an opponent's anchor so they cant take control of it.
3x Infinite Impermaneance
Flexible card that works going first or second. Going first you'd want to set it in the middle zone so that it can negate an opponent's Spell/Trap card,and going second you can set this in the same zone as a way to block off a backrow piece.
3x Solemn Strike
Impermaneance as a slower,but counter trap version,meaning the opponent can only respond to it with other counter trap cards. The 1500 LP cost isn't significant, but if you're going into time I'd side it out.

Re-raisers,cards that stop an effect or action that would hamper your plays(3):
2x Called by the Grave
Because we can only run 2 now.Generic handtrap disruption is great,and if they dont have a handtrap you can always just set it as a means of disruption during your opponent's turn. This application is more prominent in the mirror, to banish their Raye.
1x Sky Striker Mecha - Eagle Booster
Avoid negation or stall out a game so you can Hayate or something. No more than 1 is really needed, it is easily accessible and floatible via multirole.

Extra Deck:
1x Linkuriboh
Drones into this. Helps gather materials for a Borreload or Knightmare.
3x Sky Striker Ace - Shizuku
A differently-wired Engage. You can use multirole to set a card from your GY that you want 2 of,then use this card's eff to get the 2nd copy.You go through Kagari and Shizuku rapidly through out a game
3x Sky Striker Ace - Kagari
Extremely important. You run out of your Kagaris even faster than your Shizukus. Use in tandem with things like Goods or Hayate to grab any Sky Striker spell from your deck
1x Sky Striker Ace - Hayate
Lets you deal damage more often, and adds to the versatility of the deck by fixing Engage-less hands going 2nd. You don't need more copies, besides you can recycle her with Hercules Base.
1x Knightmare Phoenix
Out floodgates,because this deck loses to most floodgates. Rivalry,Gozen,Anti-Spell,Imperial Order,you name it.Make under a linkuriboh when link-climbing to get the draw 1.
1x Knightmare Unicorn
A more costly,but stronger phoenix. Lets you out multiple type of cards as it can shuffle any type of card into the deck.
1x Ningirsu the World Chalice Warrior
Out non-targetable cards like Ultimate Falcon which can lose you the game versus decks like Altergeist and Paleozoic. Its summoning condition is fairly easy to pull of mid-game,which is when your going to want to make this most of the time.
1x Firewall Dragon
Cherries target.
1x Borreload Dragon
One of your best outing materials in the deck, pretty similar to Darkest Diabolos, but this card lets you break apart already established boards by taking control of cards and beating over anything with its effect to lower by 500 combined with its 3000 body. All-round a great card,but its not so effective in the mirror, namely because of Widow Anchor.
1x Black Rose Dragon
Niche card just in here for the nuke effect,for late game in mind when you'd be losing. Get a Raye on board,then revive a Ghost Ogre in your GY via Monster Reborn or Soul Charge to synch for this and blow the board.A nice come-back card.
1xSuperbolt Thunder Dragon
Cherries Target.

Side Deck:
3x Ghost Reaper and Winter Cherries
Gouki and Danger World cant extra link or FTK you without their Firewall dragon. Thunder Dragons can get really hurt by this unless they have access to Thunder Dragon Fusion. Greatly reduces the stamina of Sky Striker decks in the mirror, with the added bonus that you may resolve it twice, banishing Kagari(higher priority) and then Shizuku (lower priority). A great side deck card for going 2nd in any deck that can afford the Extra Deck space.
3x Sky Striker Maneuver - Vector Blast!
Out Extra Link boards with this searchable spell.
3x Shared Ride
Side this in going first to lower their plays significantly. Basically Maxx "C" as a spell.
3x Twin Twisters
Because this deck loses to floodgates bad. Altergeist is currently a Tier 2 deck, so it will have a decent appearance at events.
3x Evenly Matches
By far the best going 2nd card, works vs any deck. The only excuse you can have to not run this card is its price. I have screwed over many players by making them go 2nd Game 3 and siding this and other appropriate side deck cards in,because they'd side for going 2nd,when you're making them go first. It is a bit risky to pull this off,however it can easily win you the entire game quickly, especially when you are about to go into time.

Sky Striker is a control deck,hence why the low amount of extenders,and high amount of starters and defense cards. While the Pure Variant is, from my knowledge and experience, generally more predictable and easier to counter,it is more consistent and reliable in what it does compared to the Combo Variant that runs cards like Phantom Skyblaster and Scapegoat. I am personally still exploring the Combo Variant,and hope to write about that version in the future if possible! 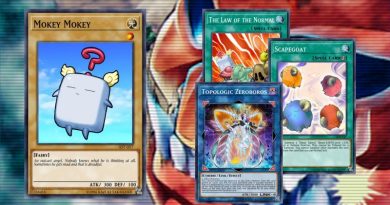 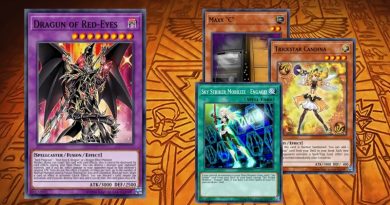 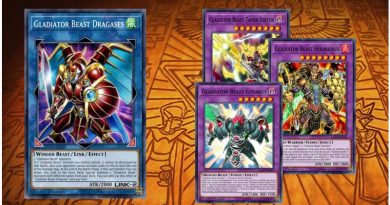