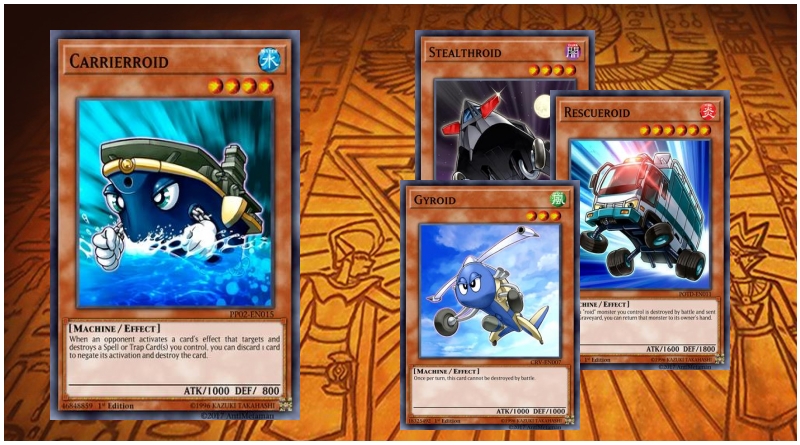 ''roid" (ロイド roido) is an archetype of cards originally released in Cybernetic Revolution and further supported in Power of the Duelist and Gladiator's Assault. All intended "roid" cards are cartoon versions of some form of vehicle. They are used by Syrus Truesdale in the Yu-Gi-Oh! GX anime and manga, and "Speedroid" by Yugo in the Yu-Gi-Oh! ARC-V anime and manga.

"Elemental HERO Necroid Shaman", "Dark Jeroid" and "Magical Android" are also "roid" monsters due to having "roid" in their respective names. However, some "roid" support cards specify Machine-Type "roid" monsters.

Informally, the "roid" cards are sometimes referred to as "Vehicroids", which is technically a sub-archetype of this one. The archetype also contains another sub-archetype, the "Speedroids".

Common strategies are either to Stall, Beatdown or Swarm. Using "Expressroid", "Ambulanceroid", and "Monster Reincarnation" is a popular combo to Special Summon a large amount of monsters. Patience is a requirement for this Deck, as it requires a great deal of time to create and run the Deck perfectly. Stronger beatdown styles often include a "Cyber Dragon" and often use it to summon "Chimeratech Overdragon". "Rainbow Life" combined with "Ambulanceroid", "Rescueroid", "Decoyroid", and "Cyber Summon Blaster" on the field can wipe out your opponent's life points. Alternatively, "Spirit Barrier" to replace "Rainbow Life" works almost as well against most Decks however cards like Dimension Wall works effectively in Roid Decks as many of the Roids are very weak and reflecting damage back at your opponent can be critical. This Deck is also very effective against Decks made around "Bad Reaction to Simochi".

Another highly used combo is "Chain Material" and "Vehicroid Connection Zone". The summoned monster will survive the effect of Chain Material (thanks to the effect of "Vehicroid Connection Zone") and you will have a very powerful monster on the field. This allows you to Fusion summon from your Deck in a similar manner to "Future Fusion". The only drawback is that you cannot attack the turn you use this combo, though it is negligible, as the monster summoned is impervious to effect destruction, and its effect cannot be negated. Prior to the release of "Stardust Dragon", this combo was considerably more powerful, since most players would be unprepared to deal with a monster that had this kind of protection; since almost all Decks now include "Stardust Dragon", cards that can work around this effect are far more commonly used.

By using "Cycroid" along with cards like "Natural Tune", this Deck can become Synchro capable.

Dragon Link is up there as one of the most enduring decks in recent times. We’ll be going over the Pure, Adventurer, and Adventurer + P.U.N.K versions.