This story originally appeared on GeekReply.com

Since beginning in the 1990s, the Yu-Gi-Oh! card game has gone through a multitude of changes. New cards types are introduced regularly, and a card’s viability can vary from month to month as game-redefining sets are introduced and ban lists are updated. Robert Boyajian has experienced many of those changes firsthand– both as a professional Yu-Gi-Oh! player with multiple tournament wins under his belt and more recently, as Konami’s TCG Marketing Specialist. He takes us through his favorite things about the TCG and how his relationship with the popular card game has changed since joining Konami’s staff.

Just Lunning: Do you have any favorite TCG exclusive card(s)?

Robert Boyajian: For cards that were initially TCG exclusive but have been released worldwide since, my favorite is Tour Guide from the Underworld. This card really defined the era that I began seeing competitive success, so it’s hard for me not to be fond of it. For recently released cards that are still TCG exclusive, Danger!? Tsuchinoko? is my number one. The “Danger!” theme has a ton of awesome lore behind the cryptids it’s themed after, and Tsuchinoko is not only one of their best cards but also the cutest in my opinion.

JL: What is the thought process behind choosing host cities for YCS and other premier events?

RB: We do our best to hold premier events in specific regions to ensure that everyone gets at least one event per year that is relatively local to them. In addition, if we have held an event somewhere that had high attendance in the past, we will likely hold it there again because it was a popular location.

JL: What was your favorite set to work on?

RB: Code of the Duelist was an awesome set because it marked the advent of Link Monsters and a lot of big changes for the TCG. It is also rare that we get to see themes used by main characters in the show be such strong contenders in the physical TCG, so having “Gouki” and “Trickstar” from Yu-Gi-Oh! VRAINS see so much competitive play was great. I was also a big fan of Dark Saviors because of the “Sky Striker” theme.

RB: My first intro to Yu-Gi-Oh! was the Dark Duel Stories videogame, and then I was lucky enough to get Starter Deck: Kaiba as a birthday gift shortly after its release. From there, I became obsessed with the anime, the manga, as well as the TCG and haven’t looked back.

JL: How important is the Yu-Gi-Oh! Anime series when it comes to marketing specific cards?

RB: The Yu-Gi-Oh! anime series will always play a big role in the physical TCG. Being able to Duel just like your favorite character from the show is a big driver for many of our fans, and right now with Yu-Gi-Oh! VRAINS simulcasting on Crunchyroll, it’s a great time to be watching the anime.

JL: When marketing a new set which is to be released, what determines which cards are to be teased for the set?

RB: Strength and perceived popularity are the primary factors. If a card is strong, we are very likely to show it off because it’s exciting for our core competitive users. If we expect a card to be popular because it revives a fan favorite theme, it is related to something from the show, or even because it’s unique, we are likely to tease those as well.

JL: How does it feel to go from being a player to then working directly with Yu-Gi-Oh! and Konami?

RB: It’s awesome to be able to work directly with a brand that I’ve been a fan of since I was a kid. It’s a bit daunting to look back on all of the events that had to happen for me to wind up here, but I can’t say I’m not thankful. I was really lucky to have a sort of transition phase where I stopped competing as much and began doing tournament coverage as a contractor to ease myself in. The only downside is that I miss competing in tournaments and winning all of those cool prizes!

JL: On that same note, has working directly with the Yu-Gi-Oh! team affected how you view or play the game?

RB: There’s definitely a different type of emotional investment now than there was before. Prior I would say it was related to how well I played, but now it’s more involved with the state of the brand and game itself. I’ve grown up loving Yu-Gi-Oh! for so long that I want to make sure everyone else loves it too!

JL: How big of an impact do you think Link Monsters (and Master Rule 4 in general) has had on the game?

RB: The most recent update to the game rules definitely had a large impact on the game. It allowed us to revamp the landscape and slow things down to make way for Link Monsters. It also gave us room to create new Link Monsters for older themes to make sure everyone got to bring their favorite strategies into the new era.

JL: How much behind the scenes anticipation was there from the team when Master Rule 4 was being revealed? Was the team anxious that the new changes may not have positively been received?

RB: There wasn’t much concern about the new changes, we thought that everyone would be excited for something new. Link Monsters introduced a ton of new strategic elements into the game by making where you place your monsters matter, and the general revamp to the landscape I described before knocking out some older strategies to make room for new ones made us especially excited.

JL: How often are old cards looked at for a possible re-train?

RB: Yu-Gi-Oh! Has a huge pool of cards but most of the older sets just don’t hold up to the modern sets. For instance, cards like Gate Guardian, with it’s extremely hard summoning conditions with little pay-off could benefit hugely from a re-train.
We often release new cards to give a modern twist to older cards and themes. Many of our recent Structure Decks such as Structure Deck: Wave of Light, Structure Deck: Lair of Darkness, and Structure Deck: Zombie Horde are all re-trains of previously released Structure Decks. Our newest booster set Soul Fusion releases new cards for “Gravekeepers” and the previous set Cybernetic Horizon also gave some love to Demise, King of Armageddon and Ruin, Queen of Oblivion. Our next all-foil booster set Hidden Summoners also gives Sacred Phoenix of Nephthys a completely new Ritual-based theme all for itself. Players love it when we release new cards for their favorite themes from the past and I doubt we’ll stop anytime soon!

Just Lunning is a Brooklyn-based writer, comedian, and young adult. He's written for places like Channel Frederator, App Trigger, Geek Reply and more. On the rare occasion Just isn't writing, he can be found performing around New York City with his two-prov team. 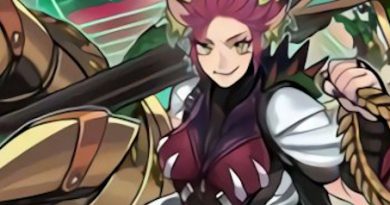 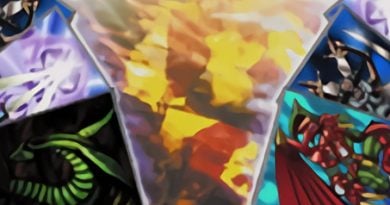 Alternate Formats - The Wonders of Cube 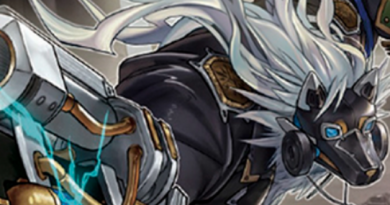