Although the Psychic type had been introduced in 2008, it didn’t see significant play until the release of Extreme Victory in May 2011. Psychic support out of the set focused on banishing monsters. Cards like Serene Psychic Witch and Silent Psychic Wizard allowed for better toolboxing and Synchro access.

Unfortunately, Psychics still couldn’t breach the top tables at a major event. Rogue status and relative obscurity seemed to be their fate.

That is until Jeff Jones, known for his creative deck building, divined a strategy to obtain second place at YCS Toronto 2012. He took Psychics nearly to the very top by abusing the power of Grandsoil the Elemental Lord. Although they were still doomed to be rogue for the rest of the format, they had their moment of grandeur in the hands of an extremely skilled player.

As usual, I will provide the decklist for you the skim before we parse through Jeff Jones’ card choices. 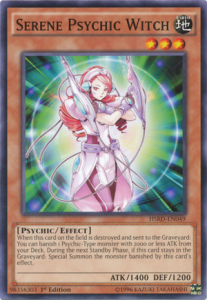 The namesake of this deck is, of course, the Psychic-type monsters that constitute its core engine. Most newer players have probably never seen most of them, so we’ll go over what they do.

The deck centered around Serene Psychic Witch, who can Special Summon another Psychic from the deck when it’s sent to the graveyard. It’s similar to Giant Rat except that destruction by card effect still triggers the floating effect. However, there’s an intermediate step. The monster has to be banished until your next standby phase before it’s summoned, which slowed down the deck and introduced a problem. A turn of set up was needed to make any significant plays. This became troublesome when the competition was decks like Wind-Ups and Dino Rabbit. Both were able to make a boss monster on their first turn. 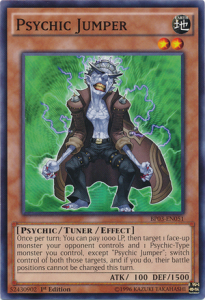 Paired with the previous two cards to make Synchros were the tuners: Psychic Commander, Psychic Jumper, and Esper Girl. Psychic Commander was primarily played as a level 3 tuner, but its effect to reduce the attack of an opponent’s monster could come up occasionally.

The interesting effects are on the level 2 tuners. Psychic Jumper switches control of a Psychic-type and an opponent’s monster. This allowed for easy Synchro Summons and provided a way to get around large monsters. If the opponent was given a Serene Psychic Witch, you could destroy it and gain its effect. Alternatively, Esper Girl was arguably the best target for banishing because it could potentially net a free card.

I’ll give a brief example of the first couple of turns for Psychics:

Using two cards from our hand (Serene Psychic Witch and Silent Psychic Wizard), we now have two monsters including a Synchro on the field and added an additional random card to our hand. Psychics were definitely a bit slow, but back then the game as a whole was slow enough to make them playable in tandem with outside support. Emergency Teleport could also sometimes speed up the process. 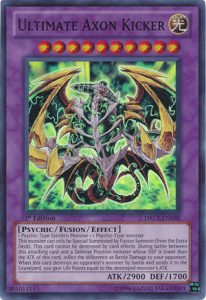 Now that we’ve established the basics of the deck, it’s time to talk what made it good. Grandsoil the Elemental Lord was a huge focus in Jeff Jones’ deck. By having exactly five earth-attribute monsters it can be Special Summoned from the hand. While on the field, it can Special Summon a monster from either player’s graveyard for free. This allowed Psychics to push for large amounts of damage a couple of turns in despite a sluggish engine. Jones cited Grandsoil as being the primary way he won a lot of his games.

Ultimate Axon Kicker was another way to push for game. Miracle Synchro Fusion could use old resources in the graveyard to summon it. 2900 attack, piercing, and immunity to destruction by card effects made Ultimate Axon Kicker a nasty monster to deal with. Although not as impactful as Grandsoil, it was a potent threat in many Psychic-type strategies at the time.

“Hey! Where Did My Monster Go?” 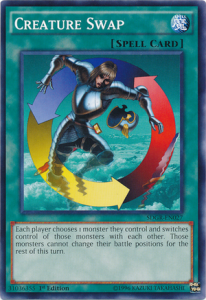 As with most decks that top high-level events, this one had some interesting tech cards. Besides Grandsoil and Miracle Synchro Fusion, we see a couple monsters and spells that really filled out the list.

The two Giant Rats were essentially slightly worse fourth and fifth copies of Serene Psychic Witch. They could summon most of the Psychic-type monsters straight out of the deck. Following the floating theme, Card Trooper draws a card when it’s destroyed and sent to the graveyard. More importantly, it also helped set up the graveyard to summon Grandsoil. Both of these monsters helped beef up the total monster count when there weren’t any other Psychic-types that you would’ve wanted to play. Of course, Neo-Spacian Grand Mole also fit in quite well because it’s Earth-attribute and could be summoned off of Giant Rat. It offered another removal option.

Gorz the Emissary of Darkness and Tragoedia were really good choices a couple years after their heyday. Considering that Psychics frequently passed turn on vulnerable boards early in the game, these cards helped protect against large pushes for damage. Tragoedia also offered level manipulation and monster stealing.

As you’ve probably noticed, there’s a strong trend of stealing the opponent’s monsters. Mind Control and Creature Swap piled on even more monster snatching. Stolen monsters could be used as Synchro fodder and, in the case of Creature Swap, giving the opponent a monster was rarely a bad thing. Low attack points and benefits from destroying them by battle often made it beneficial.

Siding Against the Meta 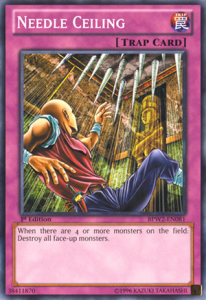 If you’re unfamiliar with this format, I recommend you read through the 2012 section of this article. The most relevant information to this deck is after the September 2012 Forbidden & Limited List, but it’s always good to understand the lead up to a format as well.

Jones included some interesting side deck choices that are worth pointing out.

Royal Decree was a really strong card against a lot of the meta decks. Wind-Ups and Geargia were two of the strongest decks at the tournament and both usually ran ten or more trap cards. Wind-Ups were also extremely vulnerable to Needle Ceiling because their combos required them to put several monsters on the field.

Both Royal Decree and Needle Ceiling were uncommon in side decks during that format, but that doesn’t even get us started on some other bizarre card choices. Cipher Soldier seems out of left field, but it was probably pretty effective against Hero Beat. Jones played Gozen Match over Rivalry of Warlords which was commonly played in other decks like Geargia. Similarly, Crevice into the Different Dimension replaced the popular Dimensional Fissure.

There are merits to both cards. Gozen Match still hurts Wind-Ups and Dino Rabbit while also being effective against Heros. It also makes more sense for Psychics since they have support cards in types besides Psychic and only one attribute. Crevice into the Different Dimension can’t be stopped by Mystical Space Typhoon, a three-of between the main and side decks for almost everyone.

How did Jeff Jones get second place in a Championship Series with this deck? Honestly, he’s just that freaking good at this game. Despite the clunkiness of the Psychic engine, he made some smart card choices—most importantly Grandsoil the Elemental Lord—and outplayed his opponents. It’s incredible what some of the best players can do. This type of player and tech based success isn’t dead either. A recent UDS Qualifier with some very skilled players had Shinobirds and Magical Musketeers make the top cut.

Since the 2012 YCS Toronto, Psychic-types have diversified significantly. They’ve been a part of several successful meta decks such as Ritual Beasts and Kozmo. It’s likely that our relatively new type Cyberse will take a similar path starting out as a self-contained theme and then diversifying. Once they get their new cards focusing on Ritual Summoning, they could surprise us much like Psychics did. 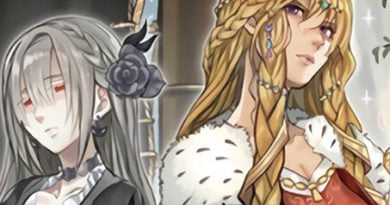 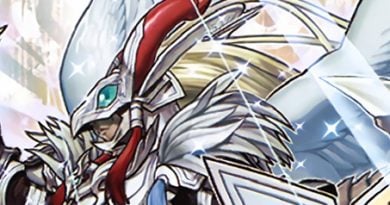 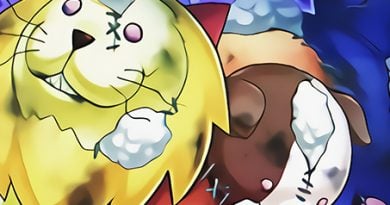