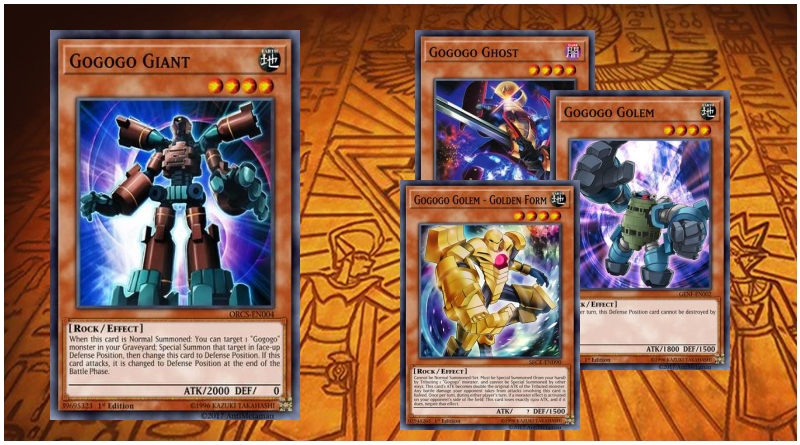 "Gogogo" (Japanese: ゴゴゴ Gogogo) is an archetype composed of Level/Rank 4 monsters used by Yuma Tsukumo and Astral in Yu-Gi-Oh! ZEXAL. All members of this archetype are EARTH Rock monsters, except for the DARK Zombie "Gogogo Ghost".

"Gogogo" monsters are useful in Xyz Summoning of Rank 4 Xyz Monsters. They can further be supported by using similar cards, like "Photon Thrasher," to Summon Rank 4 monsters that require 3 Xyz Materials. You can boost the consistency of this combo by utilizing "Summoner Monk" to search out "Gogogo Golem" or "Gogogo Giant", using the second one with "Genex Ally Birdman"; bouncing "Giant" to Synchro Summon "Black Rose Dragon" or another Level 7 Synchro Monster, while having "Giant" to use on the next turn. 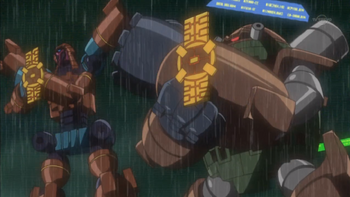 "Gagaga" (ガガガ Gagaga) is an archetype of DARK Spellcaster and EARTH Warrior monsters used by the protagonist of the Yu-Gi-Oh! ZEXAL anime and manga, Yuma Tsukumo.

Their name, "Gagaga" is from either the pronunciation for the Chinese character they use as a crest, which can be pronounced "ga" in Japanese, or the Japanese manga sound effect "ga" which is used for physical impacts, similar to the English "pow" used in comics. This could be because the "Gagaga" monsters use physical attacks in the anime and manga. All "Gagaga" monsters bear a crest of the Chinese character for the first person pronoun (我) which can be pronounced "wa" or "ga" in Japanese. The crest cannot always be seen on the individual card's artwork though, but can be seen in the anime and manga, usually on the monsters' backs. The male members of the archetype cover the lower part of their faces with scarves, except "Gagaga Child".

Despite being weak in terms of ATK and DEF, the effects of the "Gagaga" monsters allow them to change their Levels very easily, resulting in quick and easy Xyz Summons. The effect of "Gagaga Magician" allows him to change his Level from 1 through 8 and the effect of "Gagaga Girl" allows her to copy his Level. This allows them to easily Xyz Summon any generic, Spellcaster specific, or DARK Xyz Monster of Ranks 1 through 8. "Gagaga Caesar" also helps in this by using his effect to banish a monster in the Graveyard to change the Levels of all face-up "Gagaga" monsters you control to the banished monster's Level. This allows them to Xyz Summon any Xyz Monsters above Rank 8. 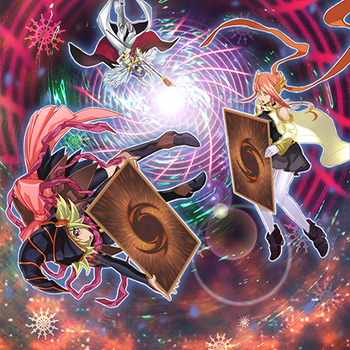 sam50
"Number" (Japanese: Ｎｏ． Nanbāzu, "Numbers") is an archetype of Xyz Monsters that are the focus of the story in the Yu-Gi-Oh! ZEXAL anime and manga series. Each "Number" monster has a corresponding natural number included at the start of its name after "Number" (and occasionally a letter, such as C). 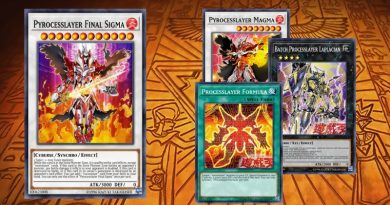 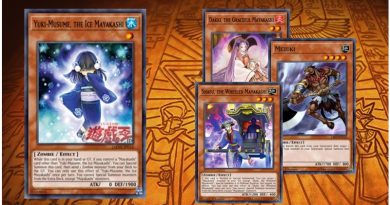 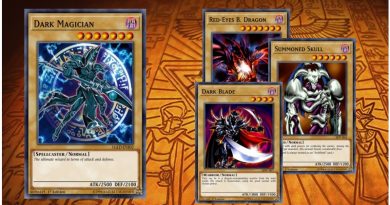