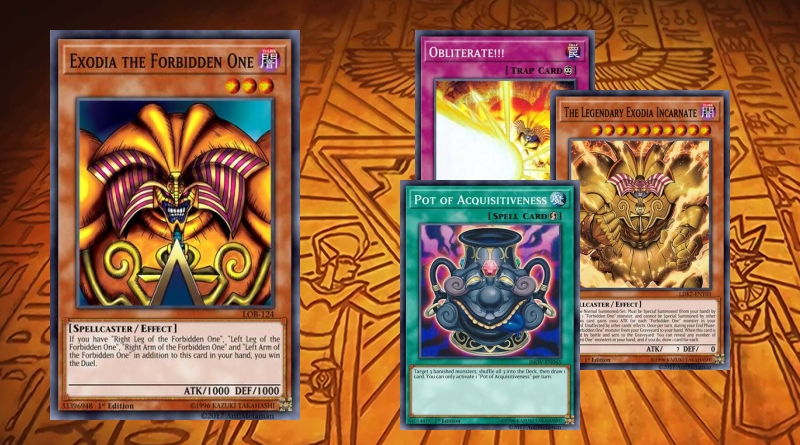 This is like every Exodia deck, except with a few changes. I'll explain all the cards and why they're there and the strategy, because I have time and why not.

First, you have the 5 Exodia pieces, they're are what you need in your hand to win...duh, there isn't another way you're gonna win with this deck.

2 The Legendary Exodia Incarnate. This card serves many purposes. First, combined with Obliterate, you can get pieces to your hand easily. It isn't affected by card effects so it won't return to your hand, and once you end your turn, you can get a piece back into your hand. Basically summon him, Obliterate him, mill a piece, bring that piece into your hand. It's also a meat shield, well not really with 0 def, but it can be used to defend against an attack. Once it is destroyed by battle though, you can show your opponent how close they are to losing and draw the same number of pieces you showed them. I only have 2, because you don't need more and 3 can cause a bit of clogging.

2 Ra Sphere Mode, basically a pumped up Kaiju, that can also be a meat shield, if you get it back. You tribute 3 (F...ing 3) of your opponent's monsters and they get this ball they maybe able to sacrifice, although your opponent needs to have 3 monsters to summon this. If they find no use for it, you get it back, and it just sits there like a shield. I don't run Winged Dragon of Ra, because Exodia is one and only true GOD.

3 Battle Faders and 3 Swift Scarecrows, basically just used to stall, and make sure your opponent's attacks don't go through.

3 Cardcar D's, use them to draw, they won't stay on the field, so they don't stop your battle phase stalls or take an attack, lowering your LP.

3 Pots of Duality, you can use them to bring anything you need to your hand whether that be to draw more, stall, or bring a piece into your hand.

1 Upstart Goblin and 1  One Day of Peace, extra draw power, Your opponent's LP don't matter, all that matters is getting the pieces or one step closer to them so that extra 1k LP you gave doesn't matter if they'll just get OBLITERATED by Exodia. 1 DOP gives you an extra turn where you don't take damage, so extra stall power. You won't attack so your opponent really gains no edge at all.

1 Hand of Destruction, it gets rid of 2 of your opponent's cards which might ruin a combo they have planned, but it could help them...cough cough Dark World cough...(Old example) or it could let them draw into something they want/need. I use it as extra draw power especially if I have 2 exodia vanillas as well as a Dark Factory.

Next, the classic Raigeki, if it can go off, basically wipes your opponent's field of monsters.

I have an insurance policy called Pot of Acquisitiveness, this is in case your opponent banishes a piece, or 2, or 3. If they banish less than 3, just bring back battle faders as well to continue stall, although you'd be a bit slowed down since your deck is bigger, but it's better than having a piece banished meaning you can't win.

The last spell, Magic Planter, this is used as draw power, while also getting rid of one of your continuous traps, Obliterate or Spiritual Swords of Revealing Light. If you haven't activated Obliterate's 1st effect and you don't need it, send it to GY, draw 2, get a piece back or an Incarnate from the GY into your hand. Or Send Swords, so if your opponent decides to Atk directly, banish it, basically ending the battle phase.

Now the traps, 3 OBLITERATES!!! basically you can send a monster back to the hand, yours (ie Incarnate...although it won't lol, or something else idk) or your opponents, annoying them and making them summon that back oof, wasting their effort and resources. Then send a piece of Exodia or Incarnate (people who send Incarnate are weird). Combining this with the effects of Incarnate or Dark Factory, getting to Exodia becomes a lot quicker.

Next 3 Threatening Roars and a Waboku, these are more stalls, you can use them in any number variant, (ie 2 TR, 2 Waboku), I prefer TR, because it prevents them from atking, monsters aren't targeted, some effects that go off because they battled or attacked can't be activated (ie Timelords...that duel took forever) so for me,  3 TR, 1 Waboku.

Lastly, 2 Heavy Dust Storm, it gets rid of up to 2 of your opponent's spells/traps or yours (ie Swords or Obliterate so you can use their 2nd effects, just like how magic planter sends them to GY). You won't atk your opponent anyway, so its drawback doesn't matter. It's like Twin Twister, but you don't need to discard, and is perfect for this deck.

THIS DECK MUST BE 40 CARDS, 40!!! This is to ensure no clogging and getting pieces and other cards you need/want faster and more probable. Also people who use deck with more suck and show rethink their lives.

3 Number 63's. In case you have a battle fader, and you want to get rid of a piece/SS to use Dark or Exodia Incarnate, etc, go into 63 and use it's draw effect. More draw power, sets up GY at times for cards listed above, and puts your on field lv 1's to use.

I have 1 Number 81, in case you have a Ra and an Exodia Incarnate you don't need, go into this. At 3.2K ATK/ 4K DEF, it is a big meat shield, and its effects makes sure it can't be affected by other card effects, forcing your opponent to basically destroy it by battle.

Other cards I have include Skypalace Gang and Superdreadnought, basically damage your opponent or destroy an opponent's card (Sky). Or it can just be a meat shield, IDK, you decide how to use it if you choose to. 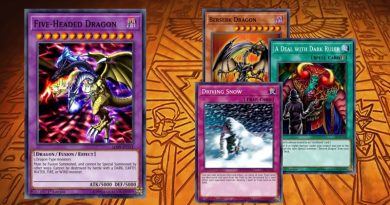 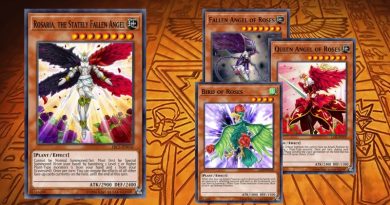 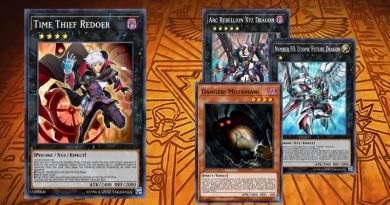