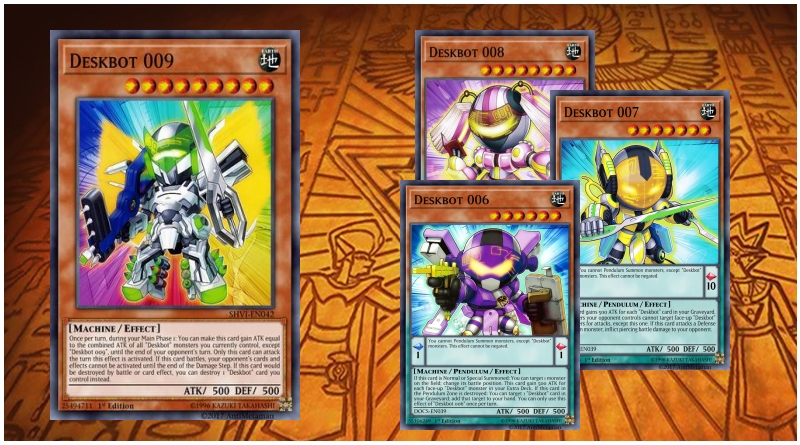 Intro to the cards

The usual main attackers are Deskbot 001, Deskbot 004, Deskbot 007, Deskbot 008, and Deskbot 009. The support cards are Deskbot 002, Deskbot 003, Deskbot 005, Deskbot 006, and Deskbot Jet. All of the Deskbots, if they have the proper setup, can deal heavy damage. The four Pendulum Monsters are Deskbot 005, 006, 007, and 008. 007 and 008 are more attack based because their effects are aimed at them getting damage in. 005 and 006 are better for Pendulum Summoning and their effects are aimed at getting more Deskbots onto the field. Deskbot Jet is the Synchro Monster. It has two effects that can be activated, but only once per turn, and once that turn. It also has it's normal effect which boosts its power. The Field Spell, Deskbot Base, is sometimes annoying, sometimes helpful. It can boost all Deskbot monsters on the fields Attack and Defense by 500. This can ruin part of the strategy. It's more useful effects are as follows: Once per turn: You can reveal any number of "Deskbot" cards in your hand and shuffle them into the Deck, then draw the same number of cards. You can banish 9 "Deskbot" cards with different names from your field and/or Graveyard, except "Deskbot Base"; shuffle all cards from your opponent's hand, field and Graveyard into the Deck. The more useful out of the useful effects is shuffling and drawing cards. It can help refresh a bad hand. The other effect is situational.

How to play them

I'm going to show you a combo I love to use with this deck. The ideal hand is as follows (If you are going first); Machine Duplication, Deskbot 003, Deskbot 005/006, Bottomless Trap Hole/Raigeki/Twin Twisters, and Deskbot 009. Place Deskbot 003, and activate his effect to Special Summon a Monster, but don't use his second effect. Special Summon Deskbot 002, and activate its effect. Add either Deskbot 005/006 to the hand (Depends on which one you got in the starting hand. If you got 005, add 006 and vice versa). Use Machine Duplication on Deskbot 002, Special Summon the two others in your deck, activate their effects. When it asks you what to add to the hand, add Deskbot Base and Deskbot 007/008 to your hand. Put 005 and 006 into the Spell/Trap Card Zones, Special Summon Deskbot 009. Place down the Bottomless Trap Hole/Twin Twisters. Activate Desktop Base, and if you want, exchange some cards. If you have yet to do so, activate Deskbot 003's effect. Use it on Deskbot 009, and once you do, activate 009's effect (Be amazed!). End your turn, and try to keep Deskbot 003 alive. This is just an example of a combo that you can use, but find more yourself.

A few major weaknesses this deck has are: Mirror Force (Any kind), Effect Negating Cards, Solemn Cards, getting a bad hand, and misclicks.

Thank you to anyone that looks at this. Enjoy the deck! 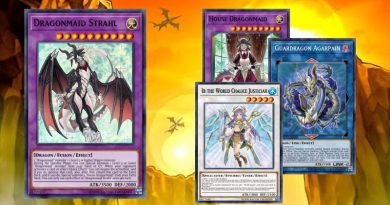 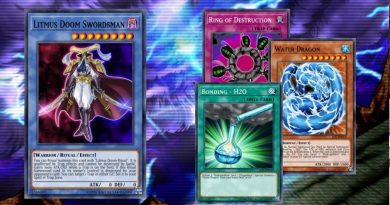 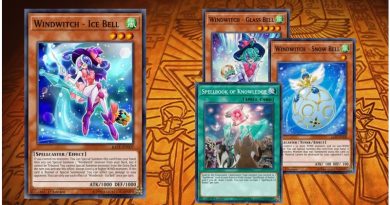